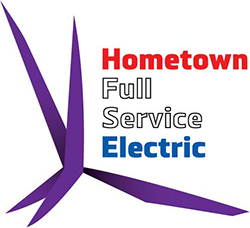 Call Us for a FREE Quote!

Based in Oklahoma City, OK

Hometown Full Service Electric furnished and installed this 20RESA Kohler generator at a local business in Oklahoma City, including automatic transfer switch. If there is a power outage, this generator will keep appliances working, HVAC running, and the security system on.

In early May of 2017, a storm moved through the south part of Oklahoma City causing damage to homes and businesses.

We were called out to remove two pole lights that had been damaged. The poles were bent at the base making them unsafe to remain standing. We removed them and ordered out new light poles and installed them later that month. The existing fixtures on the poles had no damage to them and were removed and installed on the new light poles.

The pictures show the bent pole and removal, as well as installation of the new poles on a rainy day.

The new poles are up and working, and all is good. Just another day at Home Town Full Service Electric.

We accept the following methods of payment.